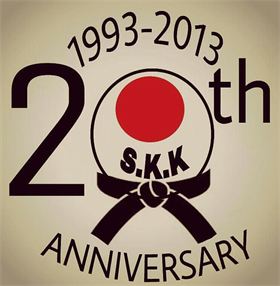 As you will see from our picture above, it has been 20 years from which i, Sensei Brett Wilkinson founded and started Shikkari Karate Kai… (seems like only yesterday).
I started karate when I was fifteen years old, and in that time I trained hard three times a week and was rewarded so with passing my Black belt 1st Dan at nineteen. After competing regularly on the north east competition circuit, as well as training I also found a new love… teaching! Before long this took me to the role of assistant instructor to my then Sensei Paul Reay.
After passing my 2nd Dan two years later, a opportunity came about by where my instructor decided to call time on his karate career as his commitment and enthusiasm was no longer there so I took over as the club’s chief instructor. However, at the time feeling very excited and optimistic the club shortly divided and i under took sixteen students as my own and from what was formally known as the Louisa Centre Karate club became Shikkari Karate Kai!
Now in those 20 years i have seen many thousands of students walk through our dojo doors… Some stayed and some left! Some reached their potentials and some you might say reached the goals they set themselves. On saying that, many students have in that time gained their black belts and won a number of trophies along the way by which i am immensely proud to have been their Sensei on that journey. I too have gained alot of personal success on winning competitions and a healthy amount of silverware to show for it, along with my current status as 6th Dan.
Which brings me to now… the present day by saying, we/i have come so far and what I believe, moved with the times but not forgetting our grass roots karate and never ever losing the passion to teach. To all those who asked me over the years and to this current day i love teaching karate.
Finally may i take this opportunity to say i/we are are so very lucky to see our success grow so much in the past few years, and that is down to our utterly fantastic team…..
Secretary Donna Wilkinson who is relentless is brining us all the facebook/website updates, Equipment orders, competitions, making sure gradings run to plan etc…god, i can go on and on!! oh, and not to mention our fabulous new anniversary logo
Assistant Instructor and Welfare officer, Sensei Tony Smith and Assistant Instuctor, Sensei Carl Wilkie who both are a major part of the club’s running. They are also very passionate at passing on their knowledge of karate to all of our students.
Here’s to another 20 successful years at S.K.K…. Osu!!!